Back during the summer of 2019, I worked a bit on the Coq kernel. At the same time, I posted a lot of toots on Mastodon about whatever random problems I was encountering. I’ve decided to collect them here, as it might just be that some of these will be useful to me again at some point.

The entire French style guide was deleted and replaced with an English translation (-ish)
IMO they should’ve kept both versions? Would be nice to have translations, don’t need to completely delete the French

okay so in summary:

yikes the execute method uses cstr for constructions tho

that’s just… missing all the vowels

no do notation tho

The heck are primitive projections
Where do I read about these

Me: adds a field to a data type
OCaml: everything red

I see why OOP is sometimes good,

it’s not a hash function bc it returns smth of the same time so I’m ??? other implementations just hashcons substructures and I’m, there’s not substructures here

You know how I decided to go ahead with adding a field to the Ind variant without waiting for my advisor to respond? Well he responded and he had the same idea as me so that’s whew didn’t waste, like, a whole morning lol

why is this change causing errors in tactics. this is terrifying

I wish they’d used different ASTs for each different place, if only that would mean I wouldn’t have to touch stuff in tactics and pretyping, which has nothing to do with me

“[Jonathan], just use regex to replace all instances of Ind \W+ to Ind ($1, _)”
I refuse to relinquish my direct oversight of ALL changes

One response on my question about type-based termination on the Coq Discourse page was
“As far as I know the semantics of sized types is not entirely understood.”
excuse u maybe u didn’t read the PhD but I underst

well I didn’t read the entire PhD. and it wasn’t the most understandable thing. and it had typos

[editor’s note: I definitely did not understand the semantics. please excuse my brashness here]

[editor’s note: surprise! the unification is the constraint-solving!]

I’ve broken something except it’s in ./theories/ZArith/Znumtheory.v so I have no idea what I did to do that

How did this compile
The signature is all incorrect

The signatures are correct, ok, but because of currying although the parameters have the wrong names they were inferred to have the right types

Is there an easier way of writing a_ref <- f !a_ref bc I initially wrote f functionally

the OCaml tutorial is extremely suck

[editor’s note: and I stand by this!]

:= for ref cells (what I wanted), <- for… object fields? dunno not my problem

I guess my variable is of type ((SConstraint.t ref) option) lmao

ah use ? when applying also

pal
I don’t know what this means

this one’s not my fault

I think it means the arity using the variables bound to the parameters in the context of parameters??

[editor’s note: the Ind is used for both inductives and coinductives!]

well! I’ve made a grave error and idk what the correct way is to proceed so I’ve been not thinking about it for the past hour lmao

maybe if I don’t think about it, it will go away
My TODO list: still contains the item
damn

Compileen changes… this should fix all me mistakes

as SOON as my thing compiles I am OUTTA here

“The algorithm works as follows: given a bare term t ◦ the algorithm computes a generic term t (such that |t| = t ◦ ), a generic type T and a constraint set C on generic size annotations, such that for every substitution ρ satisfying C, ρt has type ρT .”

that’s not an algorithm mister

I know let reduction is zeta so I would think allnolet would be the same as betaiota?? and that betaiotazeta is the same as all??

I’ve been mulling it over and I COULD implement a graph myself but why?? would I?? do that??

I’m [the fool] who mixed up module types and modules

I forgot I can’t build the test suite because

let me in, let me iiiiin

[editor’s note: I remember this problem! I don’t remember what the underlying issue was. I think it was nested match-cases…]

I really don’t wanna debug this

something funny is going on with tuple types

Do I really have to write my own unzip function

Not sure what I’d like to do next… I don’t /really/ wanna get rid of guard checking bc not everything passes sized typing
I think the next thing to do is just to deal with Definition types not preserving size and Consts not having stage annotations, which actually can be solved by making constraints global, but I don’t want to do that either… hmm…

[editor’s note: for those curious, I ended up copying code from ocamlgraph into an internal library]

I have no idea what the naming convention is in this codebase I mean in the same file I see “lna” for list of names and “tl”, “bl” for list of types and bodies like ??? okay dokay
and I /think/ “ln” for my array of indices means “list of number” but it’s neither a list nor numbers (they’re ints)
I’m changing it to int option array so I guess I’m changing it to “lon”??

In a DIFFERENT file instead of ln for list of numbers it’s called vn for…??? vector of numbers?? vectors aren’t arrays pls

Can I not pattern-match to the head and tail of a list on the left side of a let?? 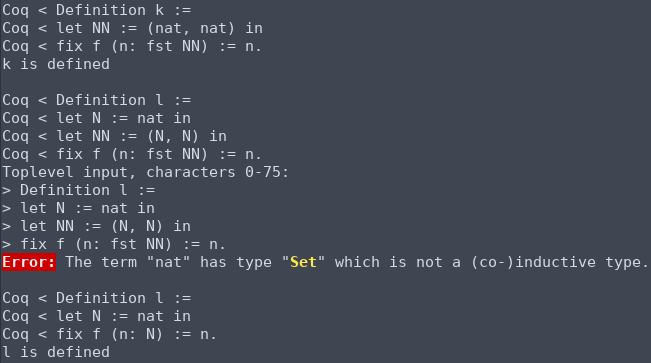 I somehow got a segmentation fault
how does this happen

I seem to have broken relative variables, somehow the de bruijn indexing is subtracting 1

It’s broken when it I infer a constant, when it passes the body of the constant into the function, which I don’t think it even should be doing??

It’s kinda terrifying I didn’t uncover a bug this big until now
Like how do I know I don’t have other huge-ass bugs floating around
I mean once I’m fully finished and I can start writing integration tests I’ll finally have tests, but I don’t use Coq which means there’ll probably be a looot of stuff I won’t think to cover

somebody at ocaml doesn’t want me using haskell patterns

NOPE that’s not the problem. great

let me call my function without crashing

anyway, so the segmentation isn’t the fault of the OCaml compiler, because I installed the beta version that has the fix to the segmentation issue and recompiled Coq and the fault was still there
so I guess at least we know what it isn’t
also I compiled Coq at a point in my branch where I thought things would work out okay until a specific point but it failed before then? so idk what’s up with that

I’m currently installing the latest base compiler at 4.08.1 instead of 4.09.0 so that’s gonna go on for a while, then I might have to recompile Coq, and then it’s back to figuring out the cause of the segmentation fault

I’ve got my first lead! Both of the programs that fail with a segfault have a mysterious unbound relative variable… hmm…

[editor’s note: this is the end of my notes on this segmentation problem?? how did I solve it??]

So I switched the implementation of the graph from my own messy Map to a nice official HashTbl kind of thing from ocamlgraph and I think it’s slower???

Note to self need to add constraints from subtyping Consts, Vars, and Rels oops

[editor’s note: the bug was that I was assigning the same stage variable to each mutually-defined inductive type instead of a fresh one for each of them]

Great. Now I HAVE to talk about mutual inductive definitions in my thesis

So about primitive record projections: